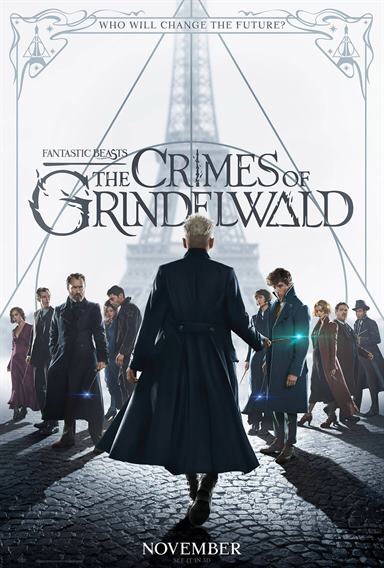 Warning: I’m going to write down just about everything that I can remember from this movie, so if you’re hoping to see The Crimes of Grindelwald unspoiled, then you should absolutely keep reading and see if I can’t persuade you to save yourself twelve bucks.

Or you can just go watch the movie first, I guess. But, staying or going, you’ve been warned. Here there be spoilers.

The fiancée and I went to see Fantastic Beasts: The Crimes of Grindelwald tonight. She’s a big Harry Potter fan. Me? Not so much, although I do like the books, especially when narrated by Jim Dale. Still, we’ve had a lot of stress in our lives recently, and so a quiet night with a fun movie seemed like it should have been just the ticket we needed.

Instead, we left the movie theater very, very sad.

The Wizarding World of Harry Potter started as a magical place, full of butterbeer, chocolate frogs, and silly make-believe words like “quidditch,” “muggle,” and “Hermione.” Unfortunately, the most recent Wizarding World stories don’t seem to be interested in the fanciful, fairy-tale nature of their source material, instead opting for the hyperactive blockbuster shenanigans of the lucrative Marvel Cinematic Universe. And, like the other franchises trying to snatch the throne from Marvel, they haven’t quite managed it.

I can already hear counter-arguments forming: “Harry Potter has grown up with its fans!” “This is the Empire Strikes Back of the franchise!” “What did you expect from a movie named after the biggest mass-murderer in the entire Wizarding World series?”

And… yeah, I concede that there’s always been a bit of darkness to the Harry Potter stories. There’s a murder or two in just about every book. Heck, the action that kicks the entire story off is the attempted murder of a baby.

But you know how that worked out? We spent the entire series following the exploits of “The Boy Who Lived.”

Right from the very beginning, there was a sense of optimism permeating through the story of Harry Potter. Tragedy never occurred simply for tragedy’s sake. When someone died, people mourned. They were shocked, grieved, angry… and, eventually, they healed. Our heroes experienced sadness, as do we all, but the sadness never felt cheap.

Well, except in The Deathly Hallows, I guess. Maybe that should have been a warning for where we’ve found ourselves now.

Yes, Harry Potter and the Sorcerer’s Stone starts with the attempted murder of an infant. Crimes of Grindelwald slides in, says “hold my beer,” and actually MURDERS the tyke. And then, to make sure we know just how serious Harry Potter is now, the movie kills ANOTHER baby. ON SCREEN.

And we’re just scratching the surface here. Remember the lovable flapper Yankee witch from the first Fantastic Beasts movie who falls in love with the bumbling yet charming muggle? Well, she’s evil now, and I’m not referring to her eventually siding up with Grindelwald. Her first act, just before the movie begins, is to mind-rape her beau to get him to marry her WHEN HE ALREADY SAID NO. I mean, consent is important, QUEENIE.

Oof, and we haven’t even touched on Grindelwald’s master plan to prevent the LITERAL NAZI HOLOCAUST by… orchestrating the mass slaughter of an entire population based solely on their lineage.

I haven’t been this angry at a movie since Batman v. Superman saw Jimmy Olson get shot in the head. Crimes of Grindelwald spends so much time committing the above war crimes that I haven’t gotten to the rest of Santa’s naughty list:

See, the biggest problem with the Fantastic Beasts movies is that they have a legitimately lovely protagonist in Newt Scamander, but they have no idea what to do with him. As portrayed by Redmayne, Scamander is awkward, shy, and bumbling, but he remains consistently sweet and charming. He’s not one of the slick, antisocial sociopaths that we so often get in nerd media – the type of person who claims to be too good for human interaction. No, Scamander is a genuinely good man with a deep affection for all living things.

In short, he’s the type of protagonist we desperately need more of, especially in our escapist fantasies. Unfortunately, such a character simply has no business being in a summer blockbuster with a half-hour action climax. Because, seriously, how is Scamander going to defeat Grindelwald? “Empathize” him to death? Don’t be ridiculous.

So to sum up: No, I didn’t like Fantastic Beasts: Special Victims Unit. But that doesn’t mean the movie is completely without redeeming value. In fact, there was one little moment that got me genuinely smiling, and, in the interest of spreading at least a little positivity, I’m going to share that here:

Newt Scamander and his love interest from the first movie, Tina Goldstein (played by Katherine Waterston) have hit a rocky point in their relationship. The reason for their estrangement is… well, it’s pure plot contrivance. Utterly ridiculous. It’s…

Anyway, during his adventures, Newt interacts with this curious monster that looks more than a little like Falcor the Luck Dragon. He manages to calm the beast down by dangling a cat toy in front of it and adopting a playful posture. It’s a pretty charming moment that feels like a return to some of the best moments from the first film.

(A brief aside: the Braddy cut of the Fantastic Beasts franchise would just be all the scenes where Redmayne interacts with the creatures. That’s it.)

Anyway, at a later point in the film, Newt and Tina have raided the French Ministry of Magic, searching for some bit of Lestrange family lore. They get briefly distracted by their personal drama. The ensuing awkward exchange has both of them talking over each other. We learn here that Tina read the book that Newt had been working on during his visit to America.

Soon, the movie decides it needs another action set piece, and out comes Falcor for a romp about the library. Newt and his friends escape, riding on Falcor’s back, and the beastie has a hard time calming back down. This time, however, it’s Tina to the rescue. She produces another cat toy and adopts the same pose and mannerisms that Newt used previously to calm the Luck Dragon down.

How did she know what to do? She read his book.

It’s a tiny moment, but that scene – heck, that one shot of Tina with the cat toy – beautifully illustrates the affection Tina felt for Newt even during his absence. Even more, though, it shows that Newt’s empathy is contagious. Newt’s defining characteristic is kindness. Kindness is what makes Newt special, but it is not unique to him. Anyone can learn to be kind. Including Tina. Including me and you.

As for how effective that kindness is in combating literal magic Nazis… well, that’s unfortunately a whole different discussion.